From Dead in the Water to Favorable Winds

August 26, 2018
Wade and I recently returned home from two glorious and relaxing weeks on Mount Desert Island, Maine, home of Bar Harbor and Acadia National Park. While we were there, we visited friends who live on a small island off MDI, a location I was particularly excited to visit because it seemed like the perfect setting for an Ann Kinnear Suspense Short. What could be more suspenseful than being on an island isolated by two miles of brutally cold water and no internet connection?

I had a high level concept for the plot before our visit, and was able to flesh out the story while I was in Maine. I felt optimistic that I would be able to publish it as a Kindle Short Read within a week or two of returning home.

After a week, I got the story to a solid pretty good—not the standard of excellence I’m aiming for—and then stalled. One of the character’s motivations seemed a bit weak. The climactic scene wasn’t as climactic as it could be. Try as I might, I couldn’t complete those final tweaks that would make it a work that I would be proud to publish. I spent another several days tinkering with it, but rough spots remained.

Continuing to try to plow ahead on the story was counterproductive—I had spent a dozen hours marginally improving my five thousand word short story when I could have spent that time more productively getting another couple of thousand words done on my novel-in-progress or an article for The Indy Author website.

I looked to my favorite metaphor of the writing process—boat building—for an approach that might help get me unstuck, but in this case the metaphor didn’t apply. Sanding down the rough spots on a wooden boat is a strictly physical, not necessarily creative, process. Even if the boat builder is not inspired by the activity, he or she can soldier through and end up with a fine, smooth surface, even if he or she doesn’t feel creatively engaged in the endeavor.

Not so with writing. If you’re sitting down at your computer or picking up your pen regularly, doing your best to clear away distractions, and taking advantage of all the support—such as beta readers—available to you, and you still can’t find a way to smooth out those last rough spots, you can’t just soldier through. And throwing up your hands and deciding that pretty good is good enough isn’t acceptable.

Perhaps a better analogy than boat-building is sailing. The sailor may have a goal of mastering his or her watercraft to achieve maximum speed, finding just the right tack, balancing sailing to the mark with finding where the wind is strongest. He or she may venture out onto the water day after day, but if the winds aren’t blowing, then the sailor is dead in the water. In that case, perhaps it’s best to put the sailboat away and bring out the rowboat for a change of pace. Perhaps a current that was hampering the sailboat will be just the thing to move the rowboat along at a brisk pace. 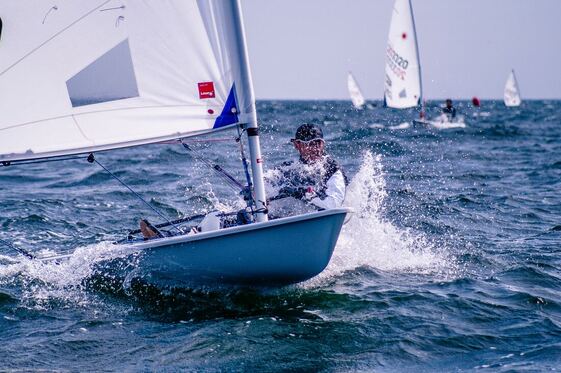 Photo by Ludomił on Unsplash
Just as the sailor can’t will the wind to blow favorably for them, we as indy authors can’t will the creative process to be favorable for a particular destination at a particular time. At some point—and I had reached that point with my short story—it’s best to put aside the becalmed project and turn your attention elsewhere. For me, that meant working on a chapter of The Craft & The Voyage—this chapter, as a matter of fact!
​
If you switch your focus to an endeavor that takes advantage of the creative winds that are blowing—and in many cases this may mean pretty much anything else in your fleet of writing projects—you will not only be spending your creative energy more effectively, but you’ll often find that when you return to that problematic work and its vexing rough spots, your creative journey will have given you insight into how to address them to ensure smooth sailing for your readers.